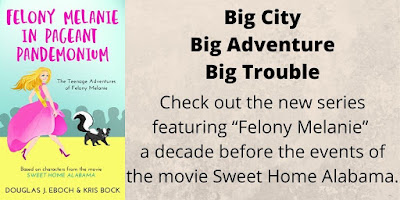 Before Melanie Smooter became hot fashion designer Melanie Carmichael, she was known as Felony Melanie, the teenage troublemaker of Pigeon Creek, Alabama. Aching to escape the boredom of small-town life, she gets into many reckless adventures. Her boyfriend, Jake, is always by her side – and the local sheriff is usually close behind.

When Melanie qualifies for the Miss Alabama Princess Pageant Southern Regional in the big city of Mobile, the first prize scholarship could be her ticket out of Pigeon Creek. But can her homemade dresses compete against the expensive gowns, and can a "trailer trash" girl survive when a haughty debutante will do anything to destroy the competition.

Meanwhile, Jake thinks beauty pageants are silly, but he’ll be there to support Melanie – as long as he can avoid getting kicked out by hotel security. Then Jake and his friends start to suspect someone is sabotaging the whole pageant. They try to follow the clues, but it isn't easy when everyone dismisses you as redneck kids.

Melanie needs to prove herself on stage. Jake and the gang need to make sure she gets the chance. Can they show they're more than what people see on the surface? 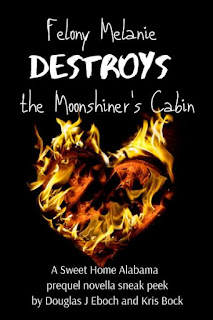 Sign up for our newsletter and get Felony Melanie Destroys the Moonshiner's Cabin. These first two chapters from the novel Felony Melanie in Pageant Pandemonium stand alone as a short story. In the future, you'll get fun content about upcoming Felony Melanie novels and other romantic comedy news and links.

“Up and at ’em.” Melanie’s mama threw open the curtains, sending a flood of sunlight into the room.
Melanie moaned as the sunlight stabbed right through her eyelids into her brain. She shaded her eyes and squinted at the clock. The numbers danced and blurred. She might still be drunk. Finally, she made out the time. Nine in the morning. Was this part of her mama’s revenge?
Her mama bumped the bed with her hip, rocking it, and Melanie’s head spun.
“Let’s go. We gotta get you cleaned up for the pageant. And the way you look, that’s gonna take some time.”
The pageant? Right, today was the Pigeon Creek Princess Pageant.
“I thought I was grounded.” Her voice sounded like sandpaper on gravel.
“You are. ’Cept for school and pageants. Those are important to your future. Now get in the shower. I’ll pack up your stuff.” Mama opened the closet and pulled out Melanie’s fancy pink gown with the big, ruffly skirt and poofy shoulders. 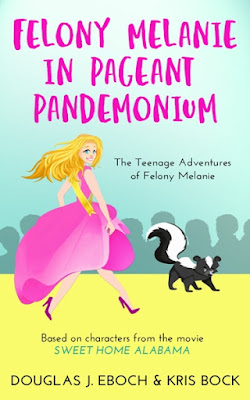 “Mama, that dress is so old-fashioned. Can I wear the new one I made?”
“You mean that plain, off-the-shoulder one?”
“It’s not plain. It’s sleek. Y’know, modern. It’s the kind that’s in all the fashion magazines now.”
“Well, that modern look may win pageants up in New York or Chicago, but Southern judges are traditional. You want to win, don’t you?”
Melanie rolled onto her side. The bed bobbed and pitched like a leaky rowboat on a windy lake. “I want to sleep,” she mumbled.
“Lordy, I swear girl, you’re gonna end up spending your whole life working down at the tire factory if you don’t shape up. You know the winner of today’s pageant gets to compete in the Miss Alabama Princess Pageant Southern Regional.”
Oh, right. The Pigeon Creek Princess Pageant was not only the most important local pageant of the year, it was a qualifier for the regional pageant over in Mobile.
“First prize at the regional pageant includes a big ol’ scholarship,” her mama said.
The scholarship wasn’t as tempting to Melanie as her mama probably hoped, but it would be so cool to go to Mobile, hang out in the big city. She had to get up. This was just a little ol’ hangover. It wouldn’t be the first time she’d powered through one of those.
She tried to sit up. The room spun. She fell back onto the bed. “I don’t feel so good, Mama.”
“I shouldn’t wonder. You hear about the judges for the regional pageant?”
“What about them?”
“Well, one is a former Miss America,” Mama said slowly, “and one is the Miss Alabama Princess from a few years back.”

No surprise there.
“There’s a professional dancer, and a cheerleading coach.”
“Uh huh.”
“And one man is a fashion designer. From New York City.”
For a moment, Melanie didn’t move. Then she pushed herself up to sitting and squinted at her mama. “For real?”
Mama nodded. “It’s in the brochure, which you’d know if you bothered to read. Now get your lazy biscuits out of bed and into that shower. I’ll make hotcakes for breakfast. Not that you deserve any after what you pulled last night.”
A real fashion designer. From the biggest, most glamorous city in America. Melanie had never met anyone who actually designed clothes before. Someone who knew the latest trends before they hit the streets of New York, years before cheap knockoff versions made it to Pigeon Creek. Better than that, he actually created the trends.
She could meet a real, live designer.
If she got to Mobile.
If she won this pageant.
Melanie had to rally. She forced herself out of bed with one big heave. Stumbled to the bathroom. Her teeth felt fuzzy as peach skin. Her eyes were red-veined marbles in sooty sockets, and her tangled hair could be hiding any number of bird’s nests. She stuck out her tongue at her reflection. Some beauty queen.
No doubt about it, the bill from yesterday had come due.
Melanie gathered her energy to pay the cost of that bill. She turned on the shower and dove in with a yelp. By the time the water warmed up, maybe she’d be awake.

Douglas J. Eboch is a screenwriter and author who wrote the original screenplay to the movie Sweet Home Alabama starring Reese Witherspoon. His sister is the author of over 80 books under the names Kris Bock, M.M. Eboch and Chris Eboch.