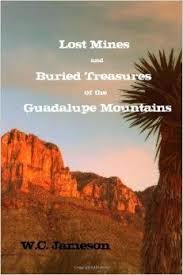 After a brief introduction, the book is divided into four quadrants for the parts of the state, allowing a local or traveler to identify legends in their area. However, the maps beginning each section seem to be decorative elements rather than useful indicators of where each story is set.

The narration is a bit more academic than in some of Jameson's work, more journalistic nonfiction and less dramatic storytelling. The stories themselves are dramatic enough, though. They show what a brutal business prospecting was. In the earliest days, Spanish Jesuit priests enslaved Apaches to mine gold. The Apaches retaliated, eventually killing all of the Jesuits. The famous Apache leader Geronimo later traded that gold for guns to aid his fight against the white man. 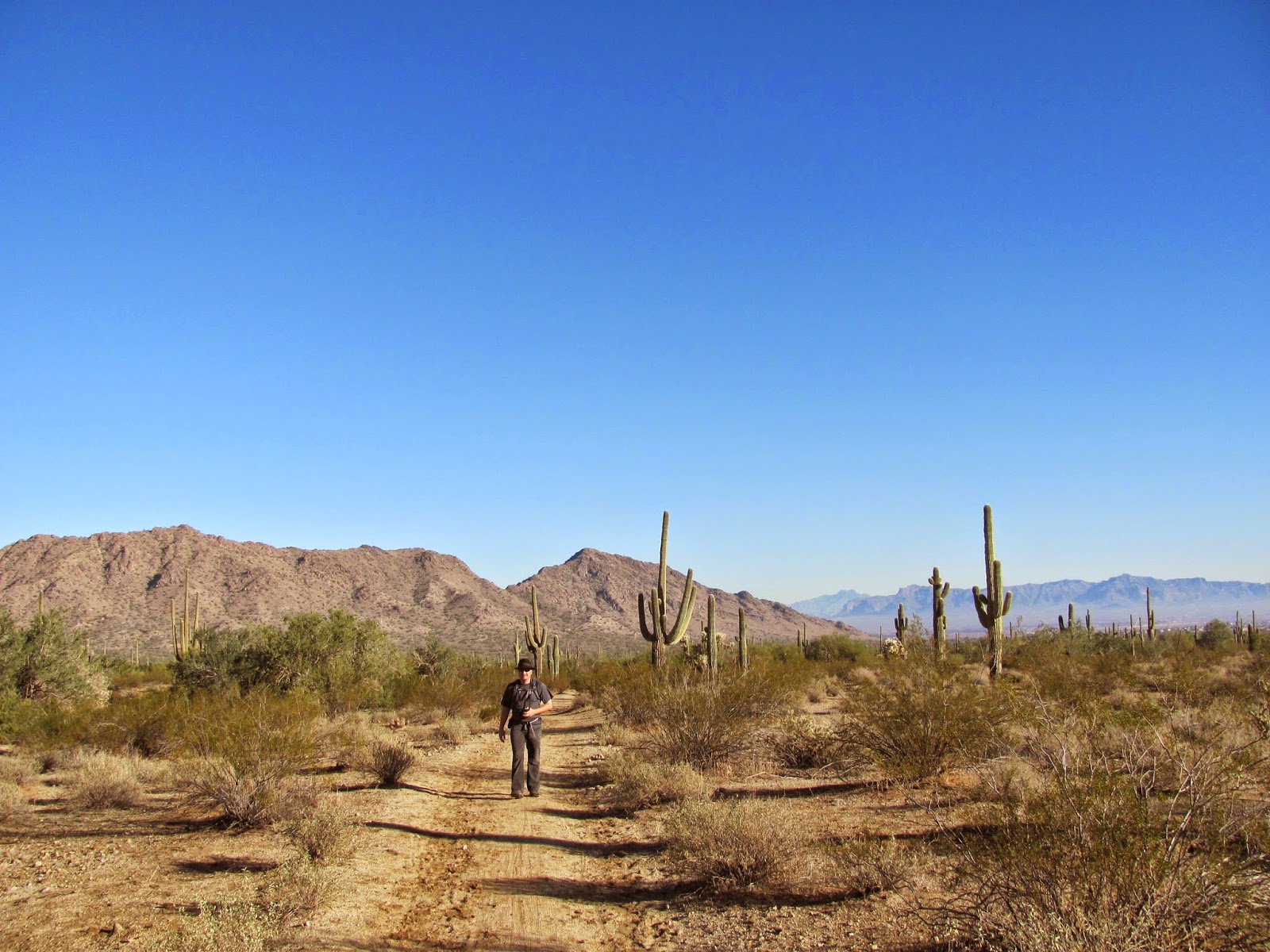 In the 1800s, miners were attacked by Native Americans, bandits, and other miners. Bandits betrayed their own gang members. Even family members could not be trusted, as in one story where two men took over their brother’s business by having him committed to an insane asylum.

In one nine-page story, "Coconino County's Lost Gold Ingots," the death toll runs into the dozens. A gang of bandits killed an Apache family for sport. A group of Apaches followed the bandits and killed several of them before they were attacked from the rear by a posse also pursuing the bandits. All the bandits died during or soon after the chase. They set off a blast in a cave to hide their loot, $400,000 worth of gold (worth close to $50 million today). One man found evidence of the treasure in 1964, but died from a heart attack before he could retrieve the gold or leave directions to his discovery.

All this in an attempt to placate the lust for gold and silver. According to Jameson, "It was believed by many [Indians and Mexicans] that to retrieve wealth that was lost or hidden was to invite bad luck."  Certainly there are few happy endings in these legends of lost mines and treasures, many of which are still buried or hidden in the remote canyons and deserts of Arizona.
Posted by Kris Bock at 8:29 AM No comments: 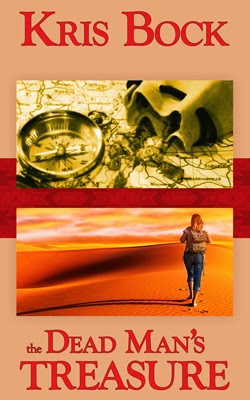 If you enjoy travel, the Southwest, riddles and puzzles, or all of those things, check out my latest romantic adventure novel, The Dead Man’s Treasure. A quick excerpt:

Rebecca’s hand shook as she reached for the box. It was a metal candy tin for peppermint bark. Maybe Grandpa had a sweet tooth? Or was this some random trash left by a tourist too lazy to bring it back to his car? She straightened and gazed down at the box. It had to hold the next clue. It would be too much of a coincidence – and too heartbreaking – if it were anything else.

She glanced at Sam and he nodded in encouragement, drawing close to her side. She swung open the lid. Several folded pieces of paper lay inside. A strip of masking tape on the inside lid had words in marker: “Take one and leave the others unless you are the last.”

Rebecca pulled out the top piece of paper and unfolded it.

Are they witches in disguise
Or prophets of the future?
The men who came here didn’t know.
They had destruction on their minds.
And they changed the world.
They ate of the flesh among bombers and bullets.
And so should you!

Then past the dead soldiers you’ll find a dead end.
One is the loneliest number
Walled off from its fellows.
Pay your respects and do not forget.

Another baffling poem. Rebecca wrinkled her nose. “This one’s kind of gruesome.” 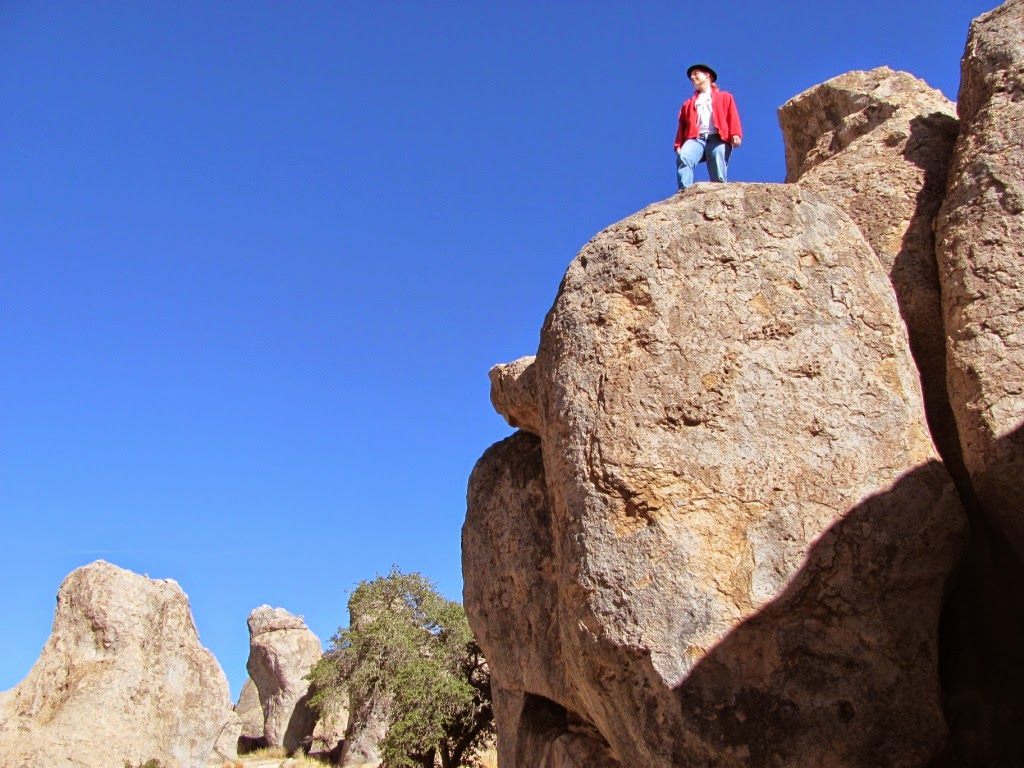 About The Dead Man’s Treasure: 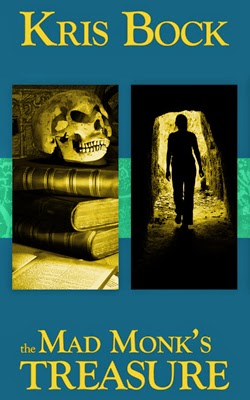 The first book in the Southwest Treasure Hunters series is TheMad Monk’s Treasure. It’s based on a legend about the Victorio Peak treasure – a heretic Spanish priest’s gold mine, made richer by the spoils of bandits and an Apache raider. TheMad Monk’s Treasure introduced Erin and Camie, who make appearances in this book. The Dead Man’s Treasure is book 2. Each novel stands alone and is complete, with no cliffhangers. This series mixes action and adventure with “closed door” romance. The stories explore the Southwest, especially New Mexico.with

The Mad Monk’s Treasure Webpage sample
Amazon
Nook
ARE
Smashwords
Posted by Kris Bock at 8:09 AM No comments:

Falcons: Inspiration from a Bird of Prey 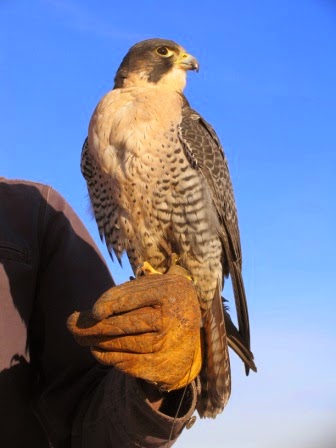 Some people are dog people, some are cat people. I like both, depending on the individual, but if anything I am really a wild animal person. One of the benefits of my New Mexico home office is that I can look out the window at the wild world wandering by – lizards, quail and many other birds, a fox family that lives in the neighborhood, occasionally even a coyote.

A couple of years ago, I met a local falconer. I tagged along on hunts, as he released a falcon after homing pigeons on a cold winter morning or let a hawk chase rabbits on a spring afternoon. (For those of you who are squeamish, the birds of prey don’t succeed as often as you might expect, but they get exercise.) I visited the falconer’s home to see newly hatched hawks and falcons. I even wrote an article about him and his birds for a local publication.

Raising falcons is an intense, time-consuming, and expensive hobby, so I don’t plan to get into falconry myself. But as an author, I could do the next best thing – I could write about it. 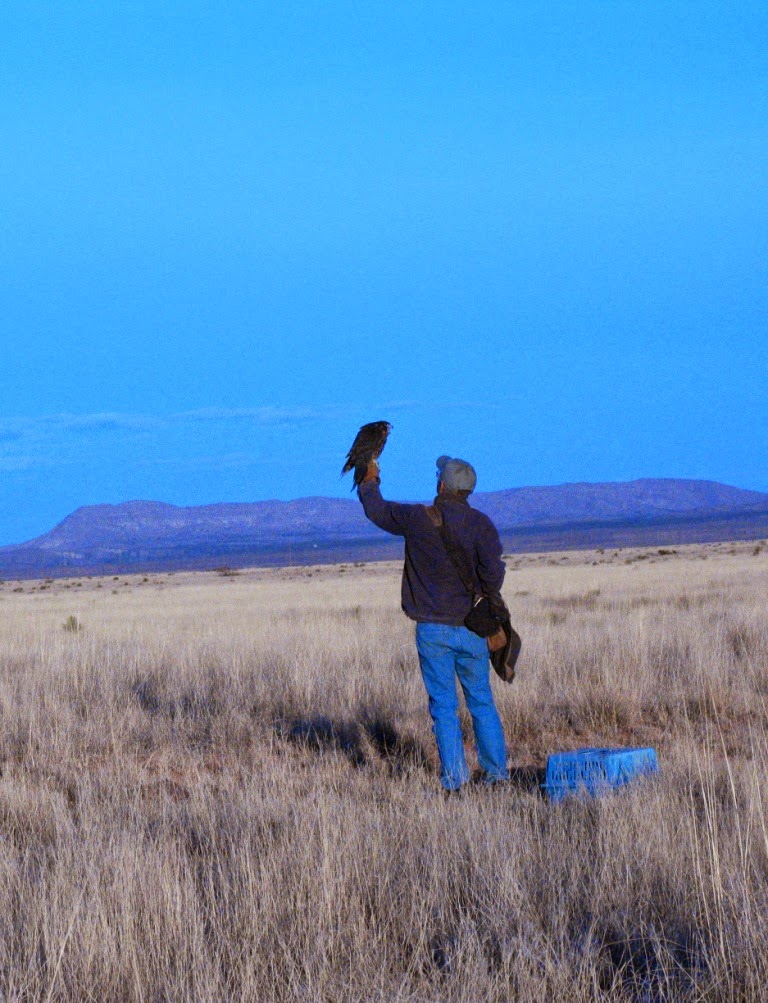 In What We Found, set in a small town in central New Mexico, a young woman stumbles on a dead body in the woods. Audra gets drawn into the investigation, but more than one person isn’t happy about her bringing a murder to light. Fortunately, she has some allies, including her brainy 12-year-old brother and self-appointed sidekick, Ricky; a sophisticated Navajo coworker, Nascha; and her goofy but loyal boss, Eslinda. And because this is suspense with a dose of romance, she has a love interest – Kyle, a mysterious young man who happens to be the brother of the murder victim.

Kyle is recovering from physical and psychological wounds he received during military service. He finds some peace helping his grandmother, Nancy, work with the falcons and hawks she keeps. Audra goes with him one morning when he's taking his falcon to hunt. This scene is closely based on one of my experiences with the falconer.

We strode across the desert, angling to pass by bushy patches where rabbits might be hiding. The hawk flew ahead again, soaring about twenty feet above the ground before landing on a small tree. She waited until we passed by, then made another hop, farther that time. Kyle raised his left arm to shoulder height. The hawk flew back and landed. Watching her come in sent a strange breathless thrill through my chest. I’d seen owls and eagles fairly close in the zoo, but there they were sitting quietly on perches. This was a glimpse of something wild and beautiful.
After fifteen minutes my feet were hurting even though I was sure Kyle was going slower than usual for him. I tried to hide my limp and wondered how long this usually took.
A jackrabbit bolted out of a bush twenty paces ahead. The hawk took off after it.
Seconds later, she swooped down behind some bushes several hundred feet away. She rose up, made a small loop, and dropped down again. Something shrieked.
Kyle was already running toward the action. I hurried after, though the distance between us quickly stretched. By the time I got there, he had the hawk on his arm again. She had a feather sticking out awkwardly from her wing. I didn’t see the rabbit and wondered if Kyle had hidden it to make it easier on me.
“She got beat up,” Kyle said. “That rabbit had some moves.”
“It got away?”
He nodded and plucked a small tuft of gray fur from the bush. “She made contact. But this time, it looks like the rabbit won.” He opened his fingers and the small tuft of fur drifted away on the breeze.
I was smiling. “The rabbit won!”
“It happens sometimes. Fortunately for our girl, she won’t starve.” He looked into her black eyes. “It’s frozen quail for you tonight, my dear.”
The falcons are realistically portrayed in What We Found, so they don’t help solve the crime or anything like that. But the falconry aspect helped me develop thematic elements of the story, added some unusual action, and provided readers with insight into an usual pastime. One reader wrote, “The falconry aspect was almost as intriguing as the unveiling of the murderer!” 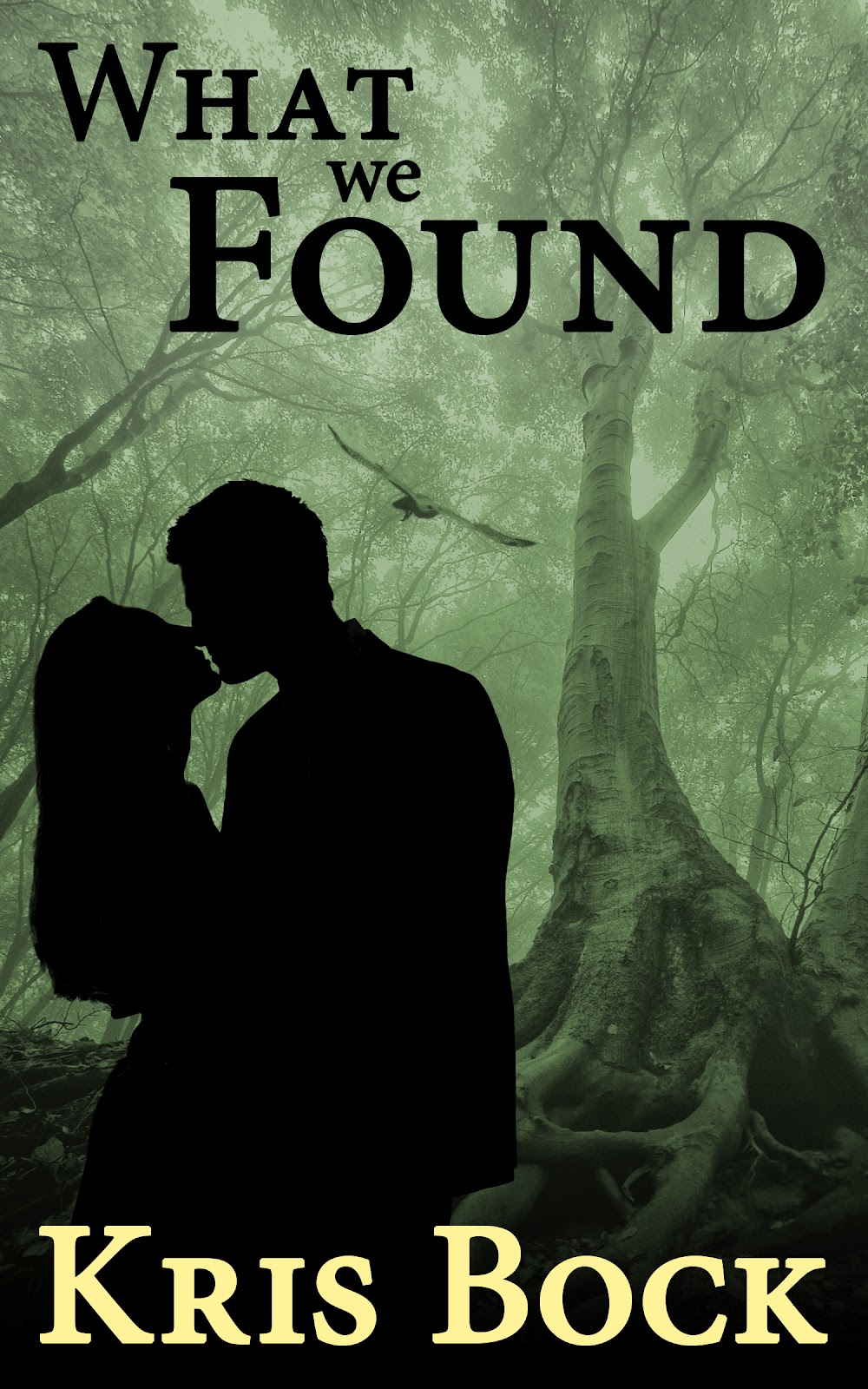 A romantic mystery: When Audra finds a murdered woman, she’ll have to stand up for herself to help the victim. It’s a risk, as is trusting the mysterious man who works with deadly birds of prey. But with danger all around, some risks are worth taking.

Read an excerpt on my website
Sample or buy What We Found on Amazon
Barnes & Noble
Apple
Smashwords
Posted by Kris Bock at 7:00 AM No comments: