Tooling Along Across Tularosa Basin with Loretta Hall

Have you ever felt history? I have, a few times. Special places like Valley Forge, Pearl Harbor, and the Trinity Site affect me more deeply than sight, hearing, and smell can account for. I get that feeling every time I drive across the Tularosa Basin between Las Cruces and Alamogordo. 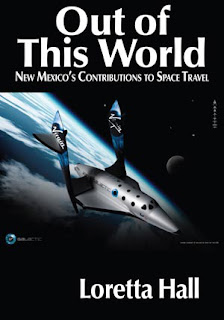 I remember the first time I drove east out of Las Cruces on US 70, crossed San Augustin Pass, and saw the basin sprawling before me. I was heading first to the White Sands Missile Range Museum and then to the New Mexico Museum of Space History in Alamogordo. It was a research trip for my first space history book, Out of this World: New Mexico’s Contributions to Space Travel.

From my research, I know that this area was truly the “Birthplace of the Space Race.” A group of German engineers brought their V-2 missile technology to White Sands Proving Ground (as it was known then) in 1945. For the next five years, they worked with Americans to dramatically increase the power and stability of rockets. In place of warheads, these rockets carried instruments and, occasionally, a small animal or two for research into the effects of spaceflight.

Just after descending from San Augustin Pass, I turned right for a short drive to the White Sands Missile Range headquarters and museum. Outside the museum stand fifty rockets of various sizes. Inside an adjacent building is a complete V-2 missile, one of only eight on display in the United States. The main museum building houses exhibits of rocket tests as well as the first atomic bomb test. Other exhibits document the history of the Tularosa Basin including early Native American occupants and nineteenth- and twentieth-century ranches.

Driving northeast across the basin from the Missile Range headquarters and museum, the scenery is stark. There is no sound, except maybe wind and sometimes another vehicle. Yet I could almost hear rockets whistling through the air and thudding into the ground. 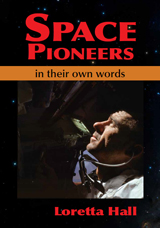 As I approached Alamogordo, I passed Holloman Air Force Base, another important contributor to America’s space programs. There, in the 1950s and ’60s, researchers tested the ability of the human body to tolerate the forces of acceleration and deceleration that would be imposed by rocket launch and spacecraft landing. A high-altitude balloon program developed at Holloman tested a prototype one-person space capsule above 99 percent of the Earth’s atmosphere. In one of those flights, a man endured isolation in a cramped capsule, coping with various emergencies, for thirty-two hours.

Continuing on through Alamogordo, I drove partway up the hillside on the east edge of town to my final destination, the New Mexico Museum of Space History. Outside are various rockets, including mangled remnants of a flown V-2 and a Little Joe II, which was used to test the launch-emergency escape system for the Apollo program. Inside the gold-tinted glass building are four floors of exhibits depicting the history of space exploration, including both American and Soviet/Russian projects. Portraits and short biographies of the inductees of the International Space Hall of Fame add a personal dimension to the other artifacts.

I’ve driven across the Tularosa Basin several times since that first trip, and the magic never seems to diminish. I invite you to take the drive, learn some of New Mexico’s less-known history, and see if the aura of the basin affects you like it does me.

Loretta Hall is a freelance writer in Albuquerque. Her two space history books are Out of this World: New Mexico's Contributions to Space Travel (http://nmspacehistory.com) and Space Pioneers: In Their Own Words (http://SpacePioneerWords.com).
Posted by Kris Bock at 8:00 AM No comments: 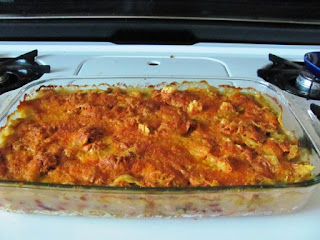 I write novels of adventure and romance set in the Southwestern United States. The novels touch on local culture, including food. For my most recent romantic suspense, The Dead Man’s Treasure, I put together a recipe booklet of foods mentioned in the book, including this delightful breakfast classic. (See also my posts Red or Green: The New Mexico Chile, Homemade Green Chile Sauce, Breakfast Burrito, Huevos Rancheros, Enchilada Casserole, and New Mexico Green Chile Chicken Soup Recipe – use these links or simply click on the “Recipe” label down to the right.)


Bob, who until recently worked at the Very Large Array, often brings this dish to parties.

See the DMT page of Kris Bock’s website for a printable version of recipes from the book. 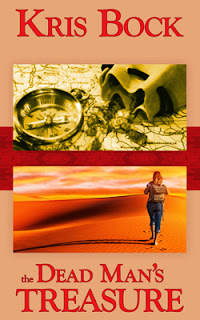 Rebecca Westin is shocked to learn the grandfather she never knew has left her a bona fide buried treasure – but only if she can decipher a complex series of clues leading to it. The hunt would be challenging enough without interference from her half-siblings, who are determined to find the treasure first and keep it for themselves. Good thing Rebecca has recruited some help.

Sam is determined to show Rebecca that a desert adventure can be sexy and fun. But there’s a treacherous wildcard in the mix, a man willing to do anything to get that treasure – and revenge. 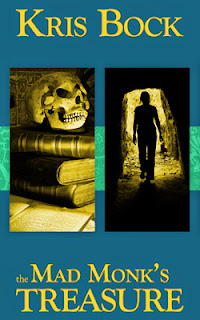 The first book in the Southwest Treasure Hunters series is The Mad Monk’s Treasure. The Dead Man’s Treasure is book 2. Each novel stands alone and is complete, with no cliffhangers. This series mixes action and adventure with “closed door” romance. The stories explore the Southwest, especially New Mexico.

Website sample
Amazon
Nook
ARE
Posted by Kris Bock at 7:30 AM No comments: