More Reviews on the Adventure #Romance The Skeleton Canyon Treasure 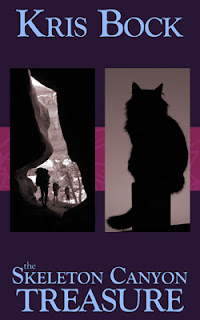 It's not too late for a summer vacation – Go on a Southwest adventure for less than a latte!

Early readers are sharing their feedback on The Skeleton Canyon Treasure, my treasure hunting romantic suspense.

Reader Winnie calls it a “Totally enjoyable treasure hunting story”: This is my first book by Kris Bock and I totally enjoyed it. Treasure hunters, treasure robbers, mystery and suspense, romance and a very sassy cat - The Skeleton Canyon Treasure kept me captivated throughout the entire book. Even though it’s the 3rd book in the series, it can be read as standalone. However, after reading this, I’m definitely going to read the 1st 2 books in the series.

Amazon reviewer Carolyn describe it as “Another great series to read!!”: I really enjoyed this book. This is the first book I have read by this author, but it definitely will not be the last. Although this is the third in the series and there were a few references to the others I never felt like I was messing anything. I loved the suspense, romance, history and a treasure hunt. And what can I say about Tiger the cat, other than I wish he was mine. Now I need to go read the other books in this series.

Check out a free sample or buy the book and judge for yourself.

Camille Dagneau – beautiful, brilliant, and prickly – isn’t quick to trust, especially when a strange man has broken into her machine shop at night. Ryan MacAllister insists he’s merely looking for his missing uncle, who has disappeared while hunting for a lost treasure. He believes Camie is the key to finding the treasure, and his uncle. Camie can ignore the attraction she feels, but she won’t pass up the chance for an adventure. Following the clues in the missing man’s journal will take Camie, Ryan, and the feisty cat Tiger on a trail through the Southwest. They’ll face steep cliffs, twisty tunnels, and worse dangers in human form, but trusting each other may be the biggest challenge. And they’re running out of time …. If you love suspense and romance, don’t miss this gripping adventure!

Pass the Pigs and Other #Camping Games

In my romantic adventure novel, The Skeleton Canyon Treasure, Camie and Ryan bond while playing games during a campout.

“I might have just the thing for us tonight,” Ryan said. “You ever play Pass the Pigs?”
“Excuse me?” If that was a sexual innuendo, it was the tackiest one Camie had ever heard.
He rummaged in his backpack and tossed something to her. She examined the small container that said “Pass the Pigs.” Inside she found, of all things, two tiny plastic pigs.
“Ever play?” he asked. “It’s competitive in the sense that you’re going for points, and there’s a winner, but it’s pretty much luck so it’s hard to take it too seriously.”
She narrowed her eyes at him in mock challenge. “We’ll see about that.”
The game involved tossing the plastic pigs on the ground. Players got points based on the way the pigs landed – on their sides or backs, on all four feet, tipped onto two feet and the snout, and so forth, with bonus points for both pigs landing in the same high-scoring position.
Camie quickly accepted that she couldn’t do much to control the outcome, especially on the uneven ground. That didn’t keep her from arguing about any toss where she could possibly debate the pigs’ position, but the arguments were full of laughter and teasing. Tiger decided Ryan’s lap was no longer a stable enough bed, so he joined in the fun, occasionally batting at a pig that landed too close to him. Then they could debate whether the original position or the new position was the one they should count, favoring, of course, whichever gave them the best lead.
Camie wasn’t even sure who had won the most games when they decided to call it a night.

This was inspired by real-life experience. I’ve hiked the Grand Canyon several times, staying at Phantom Ranch at the bottom for two nights and a rest day. It helps to have something to pass the time, but you certainly don’t want to bring anything heavy. A small e-reader or phone is nice for reading books, but it’s also fun to sit in the Lodge and play games. Pass the Pigs suits the bill because it’s goofy fun and the game itself is small and light.

Do you have favorite games that would work well on a camping trip?

Kris Bock writes novels of suspense and romance with outdoor adventures and Southwestern landscapes. The Mad Monk’s Treasure follows the hunt for a long-lost treasure in the New Mexico desert. In The Dead Man’s Treasure, estranged relatives compete to reach a buried treasure by following a series of complex clues. In The Skeleton Canyon Treasure, sparks fly when reader favorites Camie and Tiger help a mysterious man track down his missing uncle. Whispers in the Dark features archaeology and intrigue among ancient Southwest ruins. What We Found is a mystery with strong romantic elements about a young woman who finds a murder victim in the woods. In Counterfeits, stolen Rembrandt paintings bring danger to a small New Mexico town.

Read excerpts at www.krisbock.com or visit her Amazon page. Sign up for Kris Bock newsletter for announcements of new books, sales, and more.
Posted by Kris Bock at 8:00 AM No comments: