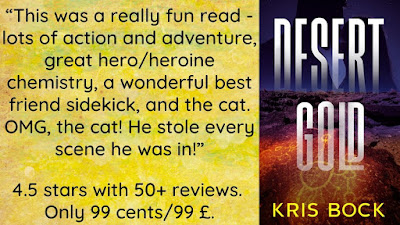 Erin shook her head. Who would’ve thought that she, the quiet, studious girl who’d spent her entire adult life in academia in one way or another, would be planning such an adventure?

She checked that the front door was locked, a habit left over from living in bigger cities, grabbed her bike helmet, and went out the back.

Erin wheeled the bike around the front of her house and mounted. At the corner, she paused and looked both ways. The long frontage road was dangerously narrow, with a cement wall on one side and a ditch on the other. Fortunately, traffic was normally light, and at this time of day the road lay empty. Erin pushed off, still grinning from her find. She rode on the right side, by the ditch, instead of facing traffic, because it was just too frightening to ride alongside the wall when a car passed.

She’d gone a block when she heard the hum of a car engine as it pulled out from a side street behind her. She rode along the very edge of the pavement, even though the car would have plenty of room to pass her without oncoming traffic.

Erin glanced over her shoulder. The black SUV 20 feet behind her hadn’t bothered to pull out into the road at all. Jerk. When would drivers learn to share the road with bicyclists? Erin pulled onto the two-foot wide gravel strip between the pavement and the ditch. She couldn’t stop without risking a skid, but she slowed so the SUV could pass.

Black metal bore down on her. Her heart lurched and the bike wobbled. This guy was crazy! She whipped her gaze forward, rose up in the seat, and pumped the pedals with all her power, skimming along inches from the ditch. He was just trying to scare her. She’d get his license plate and—

She felt the bumper hit her back tire. The bike seemed to leap into the air, and she went flying. The dried mud and weeds of the ditch seemed to rise up to meet her.

She didn’t even have time to scream. 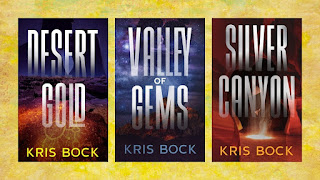 This is book 1 in the Southwest Romantic Suspense series, followed by Valley of Gems and Silver Canyon. Each novel stands alone and is complete, with no cliffhangers. This series mixes action and adventure with light romance in the Southwest. This series was originally published as The Mad Monk’s Treasure, The Dead Man’s Treasure, and The Skeleton Canyon Treasure.
Posted by Kris Bock at 4:00 AM