A Cat Café #SweetRomance on sale - 99 cents! Can a box of week-old kittens make them a family? #ContemporaryRomance #Romance 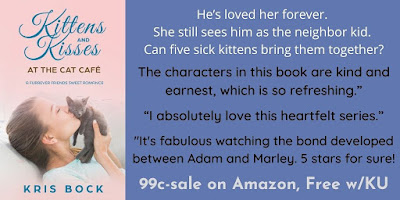 Kittens and Kisses at the Cat Café: A Furrever Friends Sweet Romance

“I absolutely love this heartfelt series.”

"It's fabulous watching the bond developed between Adam and Marley. 5 stars for sure!

Visit the Furrever Friends Sweet Romance series page on Amazon US or Amazon UK. (For other countries click here. Sale is US/UK only.)

“The second in this series is just as sweet as the first, and the characters, which we met in the first book, are even more rounded out and real. If Marley ever grows tired of Adam, I want him! The characters in this book are kind and earnest, which is so refreshing.” 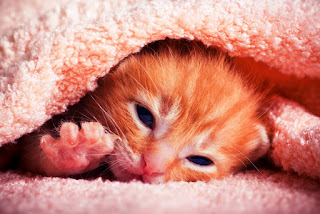 Marley shook herself. “Right, the door. I almost forgot what startled me the first time. We don’t open for another ten minutes. I don’t understand why whoever it is couldn’t wait. Nobody needs coffee that badly.”

Marley strode to the front door. She pushed it open, glanced around, and looked down. “Oh.”

“What is it?” He couldn’t see past her, but something in her voice made him want to drag her back, get out front, and protect her.

She opened the door wider, moving with it so he could see.

He looked down at a cardboard box filled with wriggling fur. “Kittens?”

Marley crouched, propping the door open with her hip. “Five of them. oh, they’re adorable.”

Adam went down on one knee beside her. One kitten was black, another black and white. One was white with specks of tan. The fourth had a brown pattern, while the fifth had orange and white swirls.

Adam scanned the area for any people. A couple of cars drove down the street. Someone from another business brought out the trash. Whoever had left the box had disappeared. In a car, they could be blocks away.

“They’re gone,” he said. “I guess they figured leaving kittens at a cat café was like leaving a baby on the doorstep of an orphanage.”

Marley stroked her finger over one tiny head. “But it’s not. We can’t even take them inside. All the cats here have had their vaccinations, but we don’t know anything about these. They’re so tiny, surely they shouldn’t be away from their mother yet.”

That would hit her hard. She adored her son with a fierceness that amazed him. Adam hadn’t understood her decision to keep the baby at first. After all, he’d only been 13, and having a baby seemed like giving up the rest of your life. But when he saw her in the hospital, holding that baby, everything changed. She’d created new life and dedicated herself to its care. She’d been plump with the baby weight, her hair tangled from the hours of labor, her face pale with fatigue, and yet she glowed with joy.

That was the day he went from having a crush to falling in love.

She didn’t know that, of course. Adam had never even told Kari, and as clever as his best friend was, he didn’t think she had the slightest idea of how he felt about her older sister.

He sometimes thought Marley and Kari’s mother, Diane, had her suspicions. But she never said anything. She probably assumed it was still puppy love. But he was 24 now. Four and a half years was a gulf when you were 13 and 18. Not so much at 24 and 28.

But would Marley ever see him as anything besides her younger sister’s best friend, the neighbor kid, her adopted little brother?

Marley looked up at him, her brown eyes luminous. “What are we going to do? I’m supposed to open in a few minutes. We can’t bring them inside. We can’t leave them here. They’re so young.”

When he was 13, he’d imagined slaying dragons for her. At 15, he’d pictured himself defending her from a gang of muggers. By 17, the daydreams had gotten slightly more realistic. He might pull her back before she stepped in the path of a speeding car. He might rescue Brian from drowning or choking, or find him in the woods when he’d wandered off. It didn’t matter that they didn’t have a forest within two miles. Adam simply wanted to be Marley’s hero. He’d been waiting for the chance. He could certainly take care of this little problem.

She frowned. Apparently she needed more than a vague promise.

“I’ll take them to the vet, the one who works with the shelter,” he added. “That’s the best place for them now, right? She can tell us what they need, where they should go.” 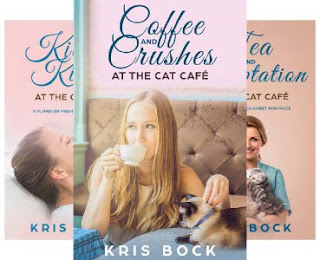 The Furrever Friends Sweet Romance series features the workers and customers at a small-town cat café, and the adorable cats and kittens looking for their forever homes. Each book is a complete story with a happy ending for one couple (and maybe more than one rescued cat). These sweet romances will leave you with the warm, cozy feeling of cuddling a purring cat.

Get a glimpse into the Furrever Friends Cat Café with Lions and Love at the Cat Café. This sweet romance novella (complete at 35 pages) is free in PDF, MOBI, or ePub when you sign up for the Kris Bock email newsletter