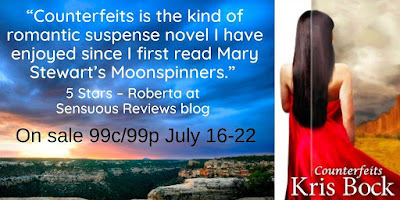 “Kris Bock is a mystery mastermind!” - Readers Favorite
Painter Jenny Kinley has spent the last decade struggling in the New York art world. Her grandmother’s sudden death brings her home to New Mexico, but inheriting the children’s art camp her grandmother ran is more of a burden than a gift. How can she give up her lifelong dreams of showing her work in galleries and museums?

“Kris Bock used all the things I love about [romantic suspense]. Appealing lead characters, careful development of the mysterious danger facing one or both of those characters, a great location that is virtually a character on its own, interesting secondary characters who might or might not be involved or threatened, and many surprises building up to the climax.” 5 Stars – Roberta at Sensuous Reviews blog

Jenny rose from sleep slowly, her body resisting. She could see nothing in the pitch black. Where was she? She blinked, trying to make sure her eyes were really open.

Memories broke through the fog. The phone call, the rush across country, the late arrival. Crawling into bed in her grandparents’ upstairs guest room. She groaned and pulled up the blanket. Morning must be hours away, given the darkness.

The old house creaked, but no sounds drifted in from outside. Maybe that’s what woke her; she was used to the murmur of city sounds all night long. Who’d have thought that would become normal? 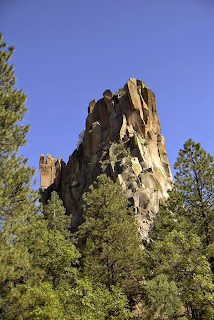 Her head pounded. Probably dehydration from the high elevation and dry air. She should get up, drink a glass of water, take a couple of aspirin. Her head would thank her in the morning. If only she could make herself move.

The house creaked again, followed by a rhythmic sound – like footsteps. Jenny jerked upright, her ears straining. Had she heard a voice?

She shook her head. She must still be half asleep, dreaming. Imagining her grandparents were still here. Wishful thinking.

Downstairs, a door closed. Jenny clutched the blanket. Imagination be damned. She was not alone.

For a long moment, she sat frozen. During her ten years in New York City, she had never been burglarized or mugged. It seemed impossible that such a thing should happen now, here, in an off-season art camp five miles outside of Jemez Springs, New Mexico.

Maybe it was someone her grandmother knew. But what were they doing there in the middle of the night? And if they’d come to see Jenny, they should have knocked, rung the bell. Waited for morning. Anyway, who knew she was there? Even Ms. Lucena didn’t know when she was supposed to arrive. She hadn’t told anyone her travel plans; she’d just gone.

She had to do something. Jenny rose and eased open the bedroom door, praying she had somehow been mistaken, that everything would make sense if… when…. She couldn’t imagine a benign explanation.

She stood with her ear to the crack and heard a low chuckle, and then a male voice. She couldn’t tell if the laugh and the voice were the same person. Either way, that suggested two or more people, at least one of them male.

She fumbled for her phone on the bedside stand. But even before she activated the screen, she gave a frustrated grunt. She wouldn’t get reception here. The only place in camp that got cell phone reception was the southeast corner of the parking lot. The landline was downstairs, in the kitchen.

Something crashed in a room below. Jenny jumped and dropped her phone. It hit her thigh, then her foot, and went skittering under the bed with a faint scrape against the wood floor.

A man was swearing downstairs. Hopefully that had covered up any sound she’d made. Jenny clenched her hands to control the trembling. She couldn’t imagine her grandmother being friendly with anyone who swore like that.

She had to get out of the house. She wouldn’t wait upstairs for the burglars, if that’s what they were, to find her. If she could get to her car – damn. Her keys were in her purse, which was downstairs on the living room couch. So she couldn’t drive, but she could still go to the Lodge, break in if she had to. Use the phone in the office, call the police.

Still shaking, Jenny crouched and felt along the floor for her shoes. She was wearing flannel pajama bottoms and a tank top; no need to waste time putting on clothes. She was already cold, but her jacket was downstairs, lying over her purse on the couch. It didn’t matter. She just had to get out.

Kris Bock writes novels of mystery, suspense, and romance, many with outdoor adventures and Southwestern landscapes. She has lived in ten states and one foreign country but is now firmly planted in the Southwest, where many of her books are set. Readers have called her novels “Like Nancy Drew for grown-ups” and “Smart romance with an Indiana Jones feel.”

Read excerpts at www.krisbock.com or visit Kris Bock’s Amazon US page or Amazon UK page. (For other countries click here.) Sign up for the Kris Bock newsletter  for announcements of new books, sales, and more.