It's #RomCom season - give the gift of a prequel to a favorite classic #RomanticComedy movie, Sweet Home Alabama! These #YoungAdult novels are fun for all ages. #BookBuzz #Holiday #GiftIdeas 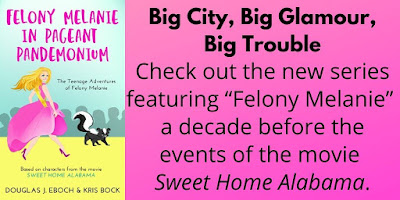 Introducing the new romantic comedy series featuring teen “Felony Melanie” before the events of the movie Sweet Home Alabama. Readers ages 12 and up will enjoy reconnecting with their favorite characters from the Sweet Home Alabama movie. Head back in time to the early 1990s for this laugh out loud rom com based on one of the best rom coms of all time.

Visit the Amazon series page for Felony Melanie: Sweet Home Alabama romantic comedy novels or sign up for our Rom-Com newsletter and get Felony Melanie Destroys the Moonshiner’s Cabin. These first two chapters from the novel Felony Melanie in Pageant Pandemonium stand alone as a short story.

Before Melanie Smooter became hot fashion designer Melanie Carmichael, she was known as Felony Melanie, the teenage troublemaker of Pigeon Creek, Alabama. Aching to escape the boredom of small-town life, she gets into many reckless adventures. Her boyfriend, Jake, is always by her side – and the local sheriff is usually close behind.

Melanie’s mother has been shoving her into every beauty pageant within twenty miles since Melanie was a toddler. Melanie is getting a little sick of it. She’s on the verge of quitting when she qualifies for the Miss Alabama Princess Pageant in the big city of Mobile. The first prize scholarship could be her ticket out of Pigeon Creek, not to mention that one of the judges is a real, live New York fashion designer. The competition will be fierce. Can a “trailer trash” girl outshine the snooty debutantes?

Meanwhile, Jake and his friends go to Mobile to support Melanie – and to party in the big city. But when strange disasters befall pageant events, the gang suspects someone is sabotaging the contest. They try to figure who’s behind it and why, but it isn’t easy when everyone dismisses you as redneck kids

Melanie needs to prove herself on stage. Jake and the gang need to make sure she gets the chance. Can they show they’re more than what people see on the surface? 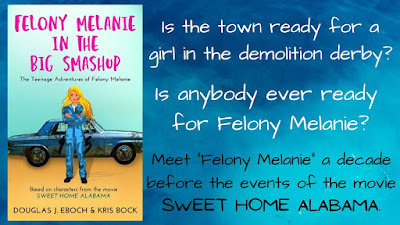 Is anybody ever ready for Felony Melanie?

Summer is almost over, so it’s time to have some fun! Jake and his buddies are fixing up old cars so they can destroy them in the Pigeon Creek demolition derby. After all, what’s more fun than smashing into things?

Girls don’t do demolition derby. Everyone says so. But Melanie is tired of sitting on the sidelines. Why should the guys have all the fun? She can smash up a car as well as anyone!

The guys don’t want a girl intruding on their turf, and it’s not so easy for a broke teenager like Melanie to find and fix up an old car. She recruits some helpers and unearths an old, junked car, but everyone from Jake to the sheriff wants to keep her off the track.

Is the town ready for a female demolition derby driver? Is anybody ever ready for Felony Melanie?

Sign up for our Rom-Com newsletter and get Felony Melanie Destroys the Moonshiner’s Cabin. These first two chapters from the novel Felony Melanie in Pageant Pandemonium stand alone as a short story. In the future, you’ll get fun content about upcoming Felony Melanie novels and other romantic comedy news and links.