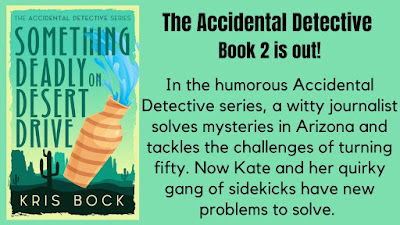 Hello from Arizona. I'm Kate Tessler. I've been a journalist for my whole adult life – almost 30 years - specializing in covering wars and natural disasters. I thought I'd seen it all, and most of it half a dozen times. I'm uncomfortable in an interview if the subject doesn't have guards armed with AK-47 assault rifles. It's a dangerous life, no matter how much you start to take it for granted.

Then one day I was too close to a bomb when it exploded.

Don't worry, I'm not a ghost – merely a 49-year-old woman who now walks with a cane. I never felt old before, but I sure am noticing the difference as I face 50. My body doesn't recover like it used to. I can't tell if the brain fog is from the painkillers, PTSD, or menopause. When people see my silver hair and cane, their gazes slide on by.

I'm not even sure if it's a blessing or a curse that the accident brought me back home to Arizona. It’s weird sleeping in my childhood room and trying to figure out how to be roommates with my father. My mother was recently diagnosed with Alzheimer's, and it’s hard seeing her like that. Dad is still pretty sharp, but he's showing his age too. Meanwhile, my sister Jen holds a grudge. For what? She’s not saying, and I don’t have the energy to figure it out. 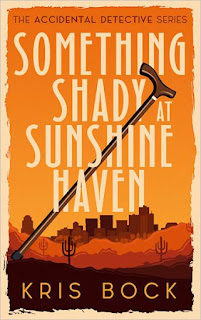 I promised myself I’d only be home for a few months to heal. Then I’d head back to the trenches. I assumed those months would be boring. What excitement could the Phoenix Metropolitan Area offer compared to Middle Eastern war zones?

But I’m no longer a teenager known as Kitty. Now I’m a famous journalist, or at least one who is somewhat well-known in my hometown. People are coming to me when they have problems that need investigation and they don't want to go to the police.

Like Heather, an old high school acquaintance who now runs a nursing home. She’s afraid two recent patient deaths might not have been natural. She wants to know if someone is killing her patients.

Why is that my problem? I'll tell you why: because my mother lives in that nursing home now. She may be fading from the woman I knew, but I'm not ready to lose her.

So it's time to shake off the brain fog, pick up the cane, and get back to investigating. This time, instead of warlords and military commanders, I'm facing down suburban housewives and trying to get information from memory care parents. Instead of a research assistant, I have a young computer genius who looks like a cheerleader and thinks like Bill Gates with better morals. Instead of bodyguards, I have my father with his men's coffee group, the Coffee Shop Irregulars.

I've lived through wars, "military operations," a kidnapping, three major earthquakes, and two hurricanes. Turns out that was just the warmup.

Something Shady at Sunshine Haven: The Accidental Detective Book 1, by Kris Bock

War correspondent Kate Tessler has followed the most dangerous news stories around the world. But can she survive going home?

Injured in a bombing, Kate returns to her hometown in Arizona to recover. For the first time in her life, she's starting to feel her age (49), even though she's living like a teenager again: staying with her father, trying to understand why her sister resents her so much, and running into people who still think of her as Kitty.

Seeing her mother in an Alzheimer's unit is the hardest part – until an old friend asks her to investigate suspicious deaths at that nursing home. Is a self-appointed "Angel of Mercy" killing patients to end their suffering? Are family members hastening their inheritance? Is an employee extorting money and removing the witnesses? Kate uses her journalism skills to track clues, but the puzzle pieces simply won't fit.

If Kate can't uncover the truth, her mother could be next on the killer's list.

Something Deadly on Desert Drive 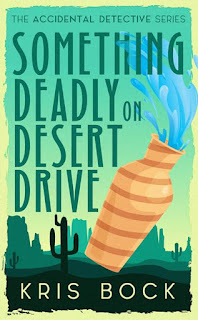 In the humorous Accidental Detective series, a witty journalist solves mysteries in Arizona and tackles the challenges of turning fifty. Now Kate and her quirky gang of sidekicks have new problems to solve. Kate's father and his coffee group are worried. Their friend Larry married a younger woman who now claims he has dementia. They think she's lying. Before they can dig out the truth, a murder raises the stakes, and Kate's father is among the suspects. To save him and Larry, Kate must reveal the real murderer – but her investigation could put all their lives at risk.

Kris Bock writes novels of mystery, suspense, and romance, many with outdoor adventures and Southwestern landscapes. Get a free Accidental Detective short story and bonus material when you sign up for her newsletter. You’ll also get a free 30-page sweet romance set in the world of the Furrever Friends cat café and a printable copy of the recipes mentioned in the cat café novels

Kris is also writing a series with her brother, scriptwriter Douglas J Eboch, who wrote the original screenplay for the movie Sweet Home Alabama. Follow the crazy antics of Melanie, Jake, and their friends a decade before the events of the movie. Sign up for our romantic comedy newsletter and get Felony Melanie Destroys the Moonshiner’s Cabin. Or find the books on Amazon US or All E-book retailers 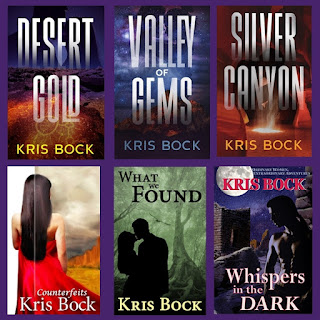