Alamogordo, New Mexico, is probably best known for White Sands, which is definitely worth a visit. But that's not the only natural beauty in the area. Last fall, when my husband and I brought a friend from Australia to tour White Sands, we also stopped briefly at Oliver Lee Memorial State Park. There we hiked the first mile of the Dog Canyon Trail in a light drizzle. We liked it enough that my husband and I planned a two-night stop on our recent camping vacation.

Oliver Lee Memorial State Park is set at the base of the dramatic Sacramento Mountains. The slopes and plateaus are largely covered with Chihuahuan Desert vegetation. That means lots of yucca and agave, along with creosote bushes and various grasses. The park and campground have incredible views, with rugged bluffs on one side and the flat plains of the Tularosa Valley on the other. White Sands shines like snow in the distance.

The visitor center has a museum with information on the history and landscape. Oliver Lee was a nineteenth-century rancher. His ranch house is preserved/rebuilt, but it's not always open and we didn't visit it. We did see the remains of an adobe and brick shelter built by "Frenchy" Rochas who homesteaded in the area. You can still see the remains of cement flumes he and Lee built for irrigation, and long stone walls Frenchy built to corral his livestock. American Indians were also active in the area over the centuries. 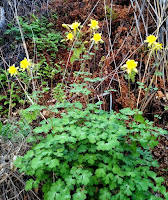 A short Riparian Nature Trail leads along a cool, shady stream, where we saw yellow columbine flowers and a hummingbird. The park also has a lovely little desert garden with a wide variety of labeled cacti and other native plants.

You can also find many fossils in the rocks, since this area was inland sea millions of years ago. We saw lots of fossil crinoids (marine animals sometimes called sea lilies) and clam/oyster-like mollusks.

The campground offers sites for RVs with water and electric, and tent sites that each have a picnic table, shelter, and nearby water pump. Avoid the tent sites that do not have shelters; as both sun and wind can be harsh. One "Comfort Station" had flush toilets, sinks, and showers, though the water was fairly cold.

If you are in the area and have an extra couple of hours, it's worth stopping by the park. If you have more time and strong legs, this is a great place to spend a day or more hiking. (Next week, I'll post about the strenuous but fabulous Dog Canyon Trail.) Spring and fall are likely to be the best seasons in terms of the weather. We had heavy winds one night that caused a lot of loud flapping from the tent, so definitely nail your stakes in well – and that was hard to do even with a 4-pound sledgehammer because the ground was so hard. Of course, you could simply stay at a hotel in Alamogordo, 12 miles away, where you'll also find some decent restaurants.

More info on the park from American Southwest.
Some details on the campground and vegetation from Explore NM.

Kris Bock writes novels of suspense and romance involving outdoor adventures and Southwestern landscapes. In Counterfeits, stolen Rembrandt paintings bring danger to a small New Mexico town. Whispers in the Dark features archaeology and intrigue among ancient Southwest ruins. What We Found is a mystery with strong romantic elements about a young woman who finds a murder victim in the woods. The Mad Monk’s Treasure follows the hunt for a long-lost treasure in the New Mexico desert. In The Dead Man’s Treasure, estranged relatives compete to reach a buried treasure by following a series of complex clues. Read excerpts at www.krisbock.com or visit her Amazon page.


Read excerpts at www.krisbock.com or visit her Amazon page. Sign up for Kris Bock’s newsletter for announcements of new books, sales, and more.
Posted by Kris Bock at 7:30 AM