Last week I talked about Camping and Touring at Oliver Lee Memorial State Park, near Alamogordo, New Mexico. Today I want to go into more detail about the Dog Canyon Trail at Oliver Lee. 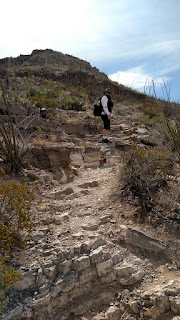 The trail is 5.5 miles long, one way. It should be possible to arrange for a pickup at the forest road at the far end. The trail starts at over 4000 feet elevation and rises over 2000 feet (some sites claim over 3000 feet). Plus, there's some up and down along the way – first you hike up to a plateau, then down to the bottom of the canyon, and then back up again. And of course if you do it as a round-trip, you have to do everything in reverse.

The trail is well maintained. Initially it's single file through a series of steep switchbacks, rising about 1400 feet in the first couple of miles. The trail opens up a bit on the plateau for side-by-side walking through bushes and grasses, then narrows again as you go down into the valley. A shady spot under the trees makes for a good lunch stop – bits of orange peel and pistachio shells show that we were not the first to think this. The remains of a small cabin sit nearby. A seasonal stream runs through the canyon; in early April it had a little sluggish water.

From there, the path heads up, up, up again, rising 1000 feet in 8/10 of a mile. The narrow path has a fairly steep drop to one side. I never felt unsafe, but I would not recommend this for restless children or anyone who has difficulty with stability.

This section is called "The Eyebrow ” for some reason, though we thought a more dramatic name, such as the devil’s horn, would be more appropriate. I couldn't find the source of the name, but apparently this was the scene of an 1878 skirmish between the US Calvary and Apaches. When the soldiers were halfway up, the Apaches bombarded them with rocks and gunfire from above. Viewing the current scenery, it's no surprise that the Calvary backed off. (More history here.) 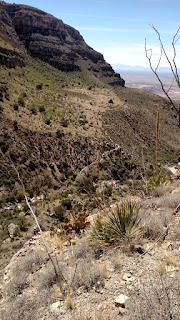 The hike is strenuous enough that it's recommended for spring and fall, as summer would be unpleasantly hot. Take plenty of water and use sunscreen – you'll be in the sun most of the time.

We "only" did about 9 miles of the 11 mile round-trip. With the elevation change, that was plenty. It took us seven hours, including lunch and rest stops. We also paused frequently to (ahem) admire the views. Bring a camera, because not only will you want to capture the scenery, but it makes a great excuse to pause for a minute and catch your breath.

The Dog Canyon Trail was quite a workout, but it was well worth it for the spectacular views. You hike through Chihuahuan Desert vegetation, with lots of yucca, agave, and creosote bushes. Rarely is there anything to block your long distance view down the canyon to the Tularosa Valley, with White Sands and mountains in the distance.

Don't neglect the close-up scenery either. When we hiked it, we saw little yellow flowers scattered beside the path, and yucca in bloom. We saw very little wildlife – one lizard, a hawk, a few random little birds, and ants. That no doubt changes by season and time of day, and you're advised to watch out for rattlesnakes.

In places the rocks hold fossilized marine mammals. They are not hard to spot if you pause and take a close look at the boulders near the path. My geologist husband was fascinated by the overall geology, which you can learn more about here from the New Mexico Beer of Geology. 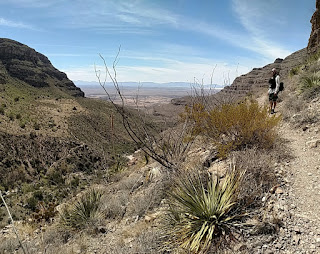 If we hike this again (and we probably will), we will likely either skip The Eyebrow section, or arrange for a pickup at the far end if possible. Otherwise the round-trip is a bit too strenuous to be really fun – part of the way back felt like a slog. Of course, your mileage may vary with your fitness level!

A map and some info from Explore NM.
All Trails has user reviews and a topo map.
Detailed trail information and a map.

Kris Bock writes novels of suspense and romance involving outdoor adventures and Southwestern landscapes. In Counterfeits, stolen Rembrandt paintings bring danger to a small New Mexico town. Whispers in the Dark features archaeology and intrigue among ancient Southwest ruins. What We Found is a mystery with strong romantic elements about a young woman who finds a murder victim in the woods. The Mad Monk’s Treasure follows the hunt for a long-lost treasure in the New Mexico desert. In The Dead Man’s Treasure, estranged relatives compete to reach a buried treasure by following a series of complex clues.

Read excerpts at www.krisbock.com or visit her Amazon page. Sign up for Kris Bock’s newsletter for announcements of new books, sales, and more.
Posted by Kris Bock at 7:30 AM