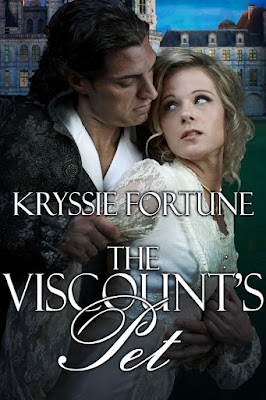 When her brother tries to arrange a marriage with the detestable Baron Cosford, Julianna strikes out on her own, but her plan is disrupted by an unexpected encounter with Viscount Stonehurst.


Stonehurst is less than pleased to find a beautiful young woman travelling alone at night, but when he discovers her predicament will the handsome gentleman come to Juliana’s rescue?

Publisher’s Note: The Viscount’s Pet is a stand-alone novel which shares the Regency-era setting of Wickedly Used and His Innocent Bride. It includes spankings and sexual scenes. If such material offends you, please don’t buy this book.

As they rode, her brief spark of anger faded into despair. She never made a sound, but tears flowed down her cheeks.

“Damn it,” Stonehurst muttered under his breath, “don’t cry.”

Despite the balmy summer night, she couldn’t stop shivering. He tightened his arms, pulling her toward him. When he buried his face in her hair, she thought he inhaled in her favorite floral perfume. She hoped it pleased him. His citrus and herbal cologne certainly delighted her.

When he reached the rose garden, the musky scent of the flowers lingered, heady and intoxicating. Despite his wooden leg, he slid easily from the saddle and helped her dismount. His hands rested a few seconds too long on her waist. She relaxed and leaned toward him, but his severe expression condemned her. While her past actions deserved his scorn, it still crushed her.

As if he couldn’t stop himself, he tugged her against him. His mouth slammed against hers, claiming, dominating, and possessing. A soft moan flowed from her. When she nestled into his embrace, her heart told her she’d come home.