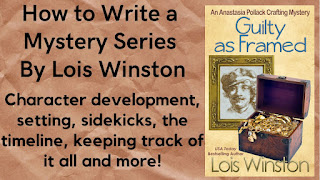 Post a comment for a chance to win a promo code for a free audiobook download of Death by Killer Mop Doll, Book 2 in the Anastasia Pollack Crafting Mysteries.

How to Write a Mystery Series by Lois Winston
I began my career writing romance. I wrote my first mystery as a result of a conversation my agent had with an editor who was looking for a crafting mystery series. Since my day job consisted of designing craft projects for kit manufacturers, craft book publishers, and both craft and women’s magazines, my agent thought I’d be the perfect person to write such a series. Thus was born my critically acclaimed Anastasia Pollack Crafting Mystery Series.
Crafts and murder don’t normally go hand-in-hand, but normal deserted magazine crafts editor Anastasia Pollack’s world the day her husband permanently cashed in his chips in Las Vegas and her comfortable middle-class life crapped out. Now she’s got her husband’s loan shark demanding payment—or else. And along with debt greater than the GNP of Uzbekistan, she’s permanently stuck with her Communist mother-in-law who is often forced to share a bedroom with Anastasia’s mother, a self-proclaimed descendant of Russian nobility.
Anastasia’s two teenage sons Alex and Nick (not named after Russian czars); her mother’s cat Catherine the Great; her mother-in-law’s dog Manifesto; and Ralph, the Shakespeare-quoting parrot, all vie for space and attention in Anastasia’s cramped suburban New Jersey home.
Did I mention this was a humorous amateur sleuth mystery series?
Throughout the series, Anastasia takes on various moonlighting jobs to pay down her debt, only to find herself constantly tripping over dead bodies, forcing her to continue sleuthing.
The advice I’m offering is based on my experience. There is no elusive Golden Ticket to Success, but there are pitfalls you can avoid if you know what they are.
1. Decide on the type of mystery you want to write.
Do you know the difference between cozy mysteries, amateur sleuth mysteries, traditional mysteries, romantic suspense, romantic mysteries, police procedurals, detective stories, and noir mysteries? If not, educate yourself. Different sub-genres have different conventions and different reader expectations. 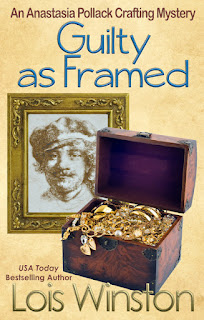 2. Decide whether you want to write a limited series or an ongoing series.
In a limited series the story arc and characters’ goals, motivations, and conflicts develop over a set number of books and are resolved at the end of the last book in the series.
An ongoing series features episodic stories that resolve at the end of each book but include the same main characters throughout the series. Plots are independent of each other but can be tied to previous books. Characters introduced in one book may return several books later. In most cases, the main characters continue to grow throughout the series, sometimes experiencing life-altering changes such as marriage, career change, or death of a family member.
3. Develop a character who can carry a series over multiple books.
Set long-term goals for your protagonist and place her in different settings to keep your series fresh. Anastasia’s moonlighting enables me to place her in different locations where she stumbles upon other murder victims. It also gives me the chance to introduce different antagonists, murder victims, weapons, and ways in which Anastasia solves the murders, keeping the stories different enough that readers don’t feel as though I’m recycling plots.
Even though you end each book with the reader learning whodunit, you want to leave your reader wondering what happens next in the character’s life. One way I’ve done this is by introducing new characters. For example, in Revenge of the Crafty Corpse, the third book in the series, I introduced Anastasia’s deceased husband’s previously unknown half-brother.
In Drop Dead Ornaments, the seventh book in the series, I give Anastasia’s older son Alex a girlfriend and create a murder plot that involves her and her father. And of course, there’s the mysterious Zack Barnes, a photojournalist who rented the apartment over Anastasia’s garage in Assault with a Deadly Glue Gun. Even though Anastasia suspects he’s really a government operative, a relationship begins to develop between them as the series progresses.
4. Give your protagonist a job conducive to discovering and solving murders.
If you’re writing about a professional investigator, this is a given, but the amateur sleuth needs a career where she isn’t chained to her desk in a cubicle forty hours a week, then goes home to spend her evenings watching TV with only her cat for company. She has to be able to get around to investigate the murders and interact with witnesses and suspects. Having family, friends, neighbors, and coworkers for her to interact with will give you more opportunities for additional plots in future books.
If your sleuth travels for her job, you can locate your plots in different locations, keeping the settings fresh and interesting from book to book. Anastasia has solved murders at the magazine where she’s the crafts editor, at the set of a morning TV show where she was a guest, at a convention center where her company was an exhibitor, and in the town where she lives, and on a cruise ship.
5. Create your sleuth’s world.
Decide whether your books will take place in a real town or city, a fictional town or city, or a fictionalized version of a real town or city. I’ve set my books in and around New York City and its New Jersey suburbs. I find it easier to keep track of locations when I’m familiar with them. It’s also fairly simple for me to go to the locations to check them out (or it was before I moved to Tennessee!) Some authors will take a real town or city but change the names. Others will create completely fictional locations.
If you decide on a fictional location, make it a place your readers will want to continue reading about from book to book. Give the place some unique characteristics. Is it a tourist destination? A commuter town near a big city? A college town? A town with only one industry? A shore town or one nestled in the mountains? Your setting should become an integral part of your series.

When an elderly man shows up at the home of reluctant amateur sleuth Anastasia Pollack, she’s drawn into the unsolved mystery of the greatest art heist in history.
Boston mob boss Cormac Murphy has recently been released from prison. He doesn’t believe Anastasia’s assertion that the man he’s looking for doesn’t live at her address and attempts to muscle his way into her home. His efforts are thwarted by Anastasia’s fiancé Zack Barnes.
A week later, a stolen SUV containing a dead body appears in Anastasia’s driveway. Anastasia believes Murphy is sending her a message. It’s only the first in a series of alarming incidents, including a mugging, a break-in, another murder, and the discovery of a cache of jewelry and an etching from the largest museum burglary in history.
But will Anastasia solve the mystery behind these shocking events before she falls victim to a couple of desperate thugs who will stop at nothing to get what they want? 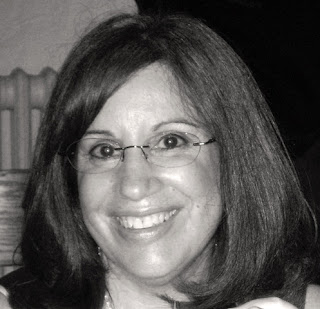 Buy Links
Paperback
Kindle
Kobo
Apple Books
Nook
Lois Winston: USA Today and Amazon bestselling and award-winning author Lois Winston writes mystery, romance, romantic suspense, chick lit, women’s fiction, children’s chapter books, and nonfiction under her own name and her Emma Carlyle pen name. Kirkus Reviews dubbed her critically acclaimed Anastasia Pollack Crafting Mystery series, “North Jersey’s more mature answer to Stephanie Plum.” In addition, Lois is a former literary agent and an award-winning craft and needlework designer who often draws much of her source material for both her characters and plots from her experiences in the crafts industry. Learn more about Lois and her books at her website www.loiswinston.com where you can also sign up for her newsletter and follow her on various social media sites.

Post a comment for a chance to win a promo code for a free audiobook download of Death by Killer Mop Doll, Book 3 in the Anastasia Pollack Crafting Mysteries.