Who wouldn't want to be a billionaire? One Texas ranching family learns the pitfalls in the Accidental Billionaire Cowboys series: #Cowboys #Romance #ContemporaryRomance #ReadzTule #BookTwitter #BookBuzz 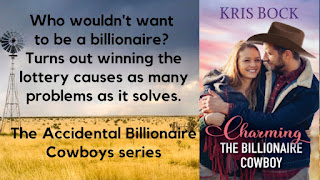 For the first time, his cowboy charm seems to backfire…

With his Texas ranching family’s lottery win, TC Tomlinson is finally able to build a ranch with alternative livestock. TC has a lot to prove, starting with his new ostrich herd, so when he catches a beauty scooping up an escaped baby bird, TC chases her down, assuming she wants to meet him for his money.

When Hallie Armstrong sees the injured baby ostrich, she jumps into professional mode. A former vet tech, she’s moved to Last Stand to work at her aunt's wildlife rescue and heal from an attack. She’s skittish of the handsome cowboy, but when he starts to flirt, she decides two can play at this game—the rescue needs fundraising, and TC is an eligible bachelor.

As they brainstorm ideas for a bachelor auction and work to solve the mystery of local sheep attacks, TC finds himself falling for the feisty cowgirl. But when he learns she’s still in danger, his protective instincts threaten to drive the independent Hallie away. Can TC convince Hallie she can have her independence and him too? 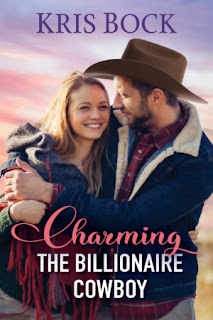 “A charming story of a cute couple destined for love.”

“[It] grabbed me right away”

“It was such good writing to have me caring about Hallie so much.”

The Accidental Billionaire Cowboys series: When the Tomlinsons win a fortune in the lottery, the formerly tight-knit Texas ranching family is suddenly on edge. Everything changes when you’re rich, and often not for the better. Can these cowboy brothers find love when everyone seems to want something else from them? 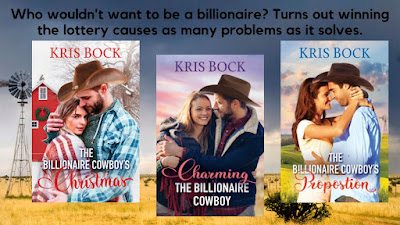 “I highly recommend this book. I look forward to the next book. Kris has a winning series here.”

“What a wonderful book! I loved every word of this book and highly recommend it.”

“I really enjoyed this book and can’t wait to see where these characters go next.”

“I can hardly wait for the next in this series. I highly recommend this clean, romantic Christmas story.” 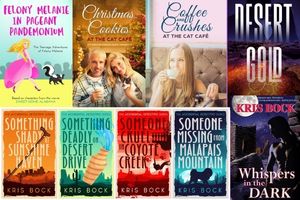 Kris Bock writes novels of romance, mystery, and suspense. Her Furrever Friends Sweet Romance series features the employees and customers at a cat café. In the Accidental Detective series, a witty journalist solves mysteries in Arizona. Get a free cat café novella, mystery stories, and more when you sign up for the Kris Bock newsletter.
Kris also writes a series with her brother, scriptwriter Douglas J Eboch, who wrote the original screenplay for the movie Sweet Home Alabama. The Felony Melanie series follows the crazy antics of Melanie, Jake, and their friends a decade before the events of the movie. Sign up for our romantic comedy newsletter and get Felony Melanie Destroys the Moonshiner’s Cabin. Or find the books on Amazon US or All E-book retailers.
Find Kris:
Website
Blog
Twitter
Instagram
TikTok
Facebook
Pinterest
GoodReads Author Page
BookBub
Amazon US page or Amazon UK page