Get #Romance and #Suspense on sale! An art theft #RomanticSuspense set in New Mexico 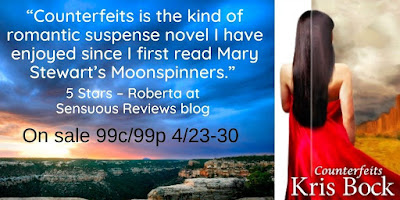 “Kris Bock is a mystery mastermind”! Review of Counterfeits from Readers Favorite

Painter Jenny Kinley has spent the last decade struggling in the New York art world. Her grandmother’s sudden death brings her home to New Mexico, but inheriting the children’s art camp her grandmother ran is more of a burden than a gift. How can she give up her lifelong dreams of showing her work in galleries and museums?

“Counterfeits is the kind of romantic suspense novel I have enjoyed since I read Mary Stewart’s Moonspinners… Appealing lead characters, careful development of the mysterious danger… a great location that is virtually a character on its own, interesting secondary characters… and many surprises.” - Roberta at Sensuous Reviews blog

On sale for only 99 cents until April 30. Visit Kris Bock’s Amazon US page or Amazon UK page.

Jenny rose from sleep slowly, her body resisting. She could see nothing in the pitch black. Where was she? She blinked, trying to make sure her eyes were really open.

Memories broke through the fog. The phone call, the rush across country, the late arrival. Crawling into bed in her grandparents’ upstairs guest room. She groaned and pulled up the blanket. Morning must be hours away, given the darkness.

The old house creaked, but no sounds drifted in from outside. Maybe that’s what woke her; she was used to the murmur of city sounds all night long. Who’d have thought that would become normal?

Her head pounded. Probably dehydration from the high elevation and dry air.

The house creaked again, followed by a rhythmic sound – like footsteps. Jenny jerked upright, her ears straining. Had she heard a voice?

Downstairs, a door closed. Jenny clutched the blanket. Imagination be damned. She was not alone.

For a long moment, she sat frozen. During her ten years in New York City, she had never been burglarized or mugged. It seemed impossible that such a thing should happen now, here, in an off-season art camp five miles outside of Jemez Springs, New Mexico.

Maybe it was someone her grandmother knew. But what were they doing there in the middle of the night? And if they’d come to see Jenny, they should have knocked, rung the bell. Waited for morning. Anyway, who knew she was there? Even Ms. Lucena didn’t know when she was supposed to arrive. She hadn’t told anyone her travel plans; she’d just gone.

She had to do something. Jenny rose and eased open the bedroom door, praying she had somehow been mistaken, that everything would make sense if… when…. She couldn’t imagine a benign explanation.

Get a free 25-page story set in the world of the Furrever Friends cat café when you sign up for the Kris Bock newsletter. You can also follow me on Amazon (go to my author page and click on the “Follow” button to the left) or BookBub (button in the upper right corner) if you only want New Release Alerts.