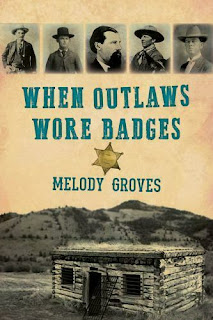 A big southwestern CONGRATULATIONS to Melody Groves for the release of her new book When Outlaws Wore Badges.

Lawman or outlaw? Black-hatted “villains” or white-hatted “good guys” of the Old West at times were one and the same. Was Wyatt Earp truly law-abiding in everything he did? He stole horses and ran brothels. How about Albuquerque’s first Town Marshal, Milton Yarberry, accused of murder and subsequently “jerked to Jesus”? “Mysterious” Dave Mather, and even two of the Dalton Gang spent time behind a badge as well as behind bars.

When Outlaws Wore Badges explores the world of lawman and outlaw wrapped into one person. Willcox, Arizona’s Town Marshal, Burt Alvord, appointed outlaw friends as deputies, robbed a train, then formed a posse of his “deputies” to apprehend the robbers, unsuccessfully of course. Justice Hoodoo Brown and deputy JJ Webb ruled Las Vegas, NM as leaders of the Dodge City Gang until run out of town by citizens fed up with their type of justice.

Hollywood draws a convenient line in the Western dirt, differentiating between lawman and outlaw. But in reality, at times it was difficult, if not impossible to distinguish who was who. When Outlaws Wore Badges explores the lives of some of the West’s most memorable frontier characters.

New Mexico native Melody Groves loves anything Western. Winner of numerous writing awards, her most recent non-fiction book is Butterfield’s Byways: America’s First Overland Mail Route Across the West. Specializing in Western history, she has authored two fiction series: The Colton Brothers Saga and The Maud Overstreet Series. A member of Western Writers of America and Southwest Writers, she also plays rhythm guitar in The Jammy Time band. She lives in Albuquerque. Learn more at her website.